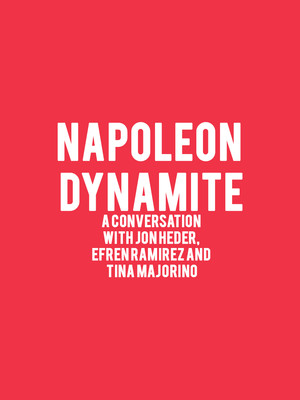 Director/co-writer Jared Hess revels in sketching middle-American misfits, and he does it well.

Sweet but never syrupy, Jared Less' ode to prepubescent struggles celebrates the nerds and the misfits. Set in the rural town of Preston, Idaho, Napoleon is a socially inept teen who daydreams his way through the pressures of high school and bullying, doodling ligers (lions crossed with tigers) and making up stories in which he is a hero with 'mad skills'. With the help of his newly found friends Deb, a shy girl and budding entrepreneur, and Pedro, a transfer student from Mexico, Napoleon sets about making his mark on his pastoral settings with the all important school dance on the horizon... Gosh!

Sound good to you? Share this page on social media and let your friends know about Napoleon Dynamite: A Conversation with Jon Heder, Efren Ramirez and Tina Majorino at Muriel Kauffman Theatre.