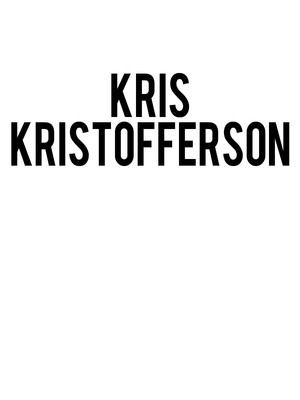 Kris Kristofferson has been a fixture of America's cultural landscape since the early 1970s. After leaving the army, Texas-born Kristofferson moved to Nashville to pursue his love of music in 1965, and soon became a prodigious songwriter, penning iconic tunes for the likes of Johnny Cash, Dave Dudley, and most notably, 'Me and Bobby McGee', which was a number one hit for Janis Joplin. From there his star as a recording artist in his own right was on the rise, as was his career in the movies, appearing in a string of classic flicks like Alice Doesn't Live Here Anymore and A Star is Born.

A songwriter of rare perception and humanity, Kristofferson remains as vital a stage presence as ever, with one of music's great back catalogues to call upon. Catch him when he plays in , ,

A Star Was Born : “The storyteller still charms the house”

I've been listening to his poetic stories since I was a child and they... more

Anonymous: “A Brilliant Writer, An Audience In Synch”

The crowd was with Kris and The Strangers from the minute the concert started!... more

Sound good to you? Share this page on social media and let your friends know about Kris Kristofferson at Uptown Theater.