Sorry! You missed Bush And Live at Starlight Theater 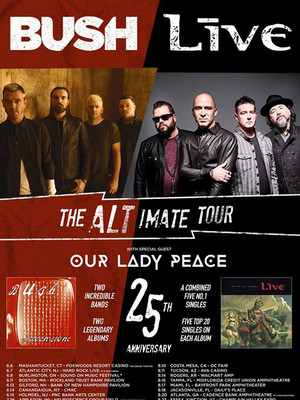 Don't miss Bush and Live on this special tour!

Why See Bush And Live?

Two titans of the nineties alt-rock boom join forces this summer as they embark on The Alt-imate Tour! Both Bush and Live will perform their breakthrough albums, Sixteen Stone (Bush) and Throwing Copper (Live), in this full-throttle night of alt-rock. Don't miss your chance to see these two pioneering bands live!

Both breaking into the music scene in the year of 1994  Bush and Live have both enjoyed a 20-year strong career. With their seminal albums hitting the top spots in the US Billboard 200 charts, Bush and Live have become two of the most influential bastions of the alt-rock scene. With a combined might of 15 studio albums, pay homage to Bush and Live's iconic early work in this unique tour!

Sound good to you? Share this page on social media and let your friends know about Bush And Live at Starlight Theater.