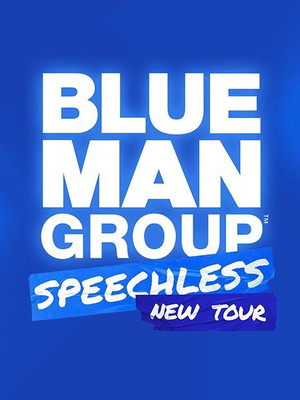 Now a true phenomenon in the world of entertainment, the Blue Man Group have come a long way since their inception in the late '80s. The drums and bright paint remain but the rest of the show has had several injections of technological trickery, current cultural references and refreshed humor. Oh no, this isn't the show you saw all those years ago - the Blue Man Group is back with brand new show Speechless! Seen live by over 35 million people worldwide, Blue Man Group blends percussive music, vaudeville, art and theater to create a multi-sensory experience unlike anything you've ever seen.

Created by Jenny Koons, Speechless combines all of Blue Man Group's iconic charm including dazzling light shows, gallons of fluorescent paint (the first couple of rows are a splash zone for a reason) and a thunderous dose of drumming, with brand new moments. Expect innovative compositions played on invented instruments, large scale audience participation and much much more.  Oh, and this madness is all built around three blue-painted lovable weirdos. They may be mute but they speak the universal language of amazement!

The creation of friends Matt Goldman, Chris Wink, and Phil Stanton, the Blue Man Group was founded in 1987, and debuted their act Off-Broadway in 1991, receiving rave reviews - and they haven't looked back since.

As well as this tour, Blue Man Group has permanent shows in New York, Chicago, Orlando, Boston, and Las Vegas. That's a lot of blue paint!

Suitable for audiences of all ages

Was so disappointed! I couldn’t follow the speechless theme and I sat... more

Sound good to you? Share this page on social media and let your friends know about Blue Man Group at Starlight Theater.