Sorry! You missed New Kids On The Block at Sprint Center 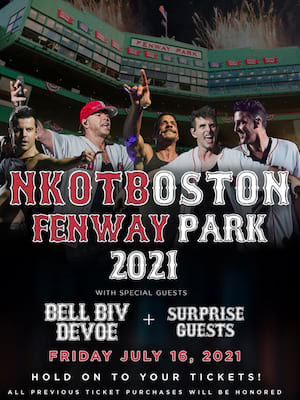 New Kids On The Block

New Kids On The Block return with mammoth tour!

Why See New Kids On The Block?

Taking You Back To A Time You Loved

In an era where boy bands, girl bands and bubblegum pop stars ruled the roost, new Kids On The Block were the first of the preteen sensations to hit multi-platinum. This year sees the late eighties, early nineties sensations hitting 53 cities on their mammoth Mixtape Tour where they'll be joined by 80s music stars Salt-N-Pepa, Tiffany, Debbie Gibson and Naughty by Nature.

Expect to hear hits 'Hanging Tough', 'I'll Be Loving You (Forever)', and 'Step By Step', alongside them creating a mixtape at every tour location! The four supporting acts will also be playing hits from their catalogues.

Released in 1988, 'Hangin' Tough' may be the album that jump started their career, but it actually wasn't NKOTB's first sonic foray into the industry. Whilst their self-titled debut achieved airplay success around their hometown of Boston, its heavily manufactured pop sound failed to gain traction nationally, so the boys returned to the studio with a new sound in mind and experimented with an urban contemporary feel, blended with pop rock. The resulting album had a slow start, but caught on like wildfire when its lead single 'Please Don't Go Girl' became the most requested song on radio stations across the nation's playlists.

Sound good to you? Share this page on social media and let your friends know about New Kids On The Block at Sprint Center.